Posted on June 9, 2013 by bigjeffbristol 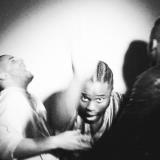 Scotland is not a country that is well-known for its hip hop but there are some exceptions and Young Fathers are one of those such exceptions, capturing the attention of Anticon Records with their fresh beat production and Irreverent wordplay.

I saw these guys last night in start The Bus and they were full of explosive energy, with each one of the MC’s breaking into frenetic dance routines as well as spitting out beautifully poetic lyrics that draw on really touching subjects such as love, loss, social upbringing and War.

From the off you can see why Anticon picked up on Young Fathers because they show real innovation with nods towards fellow Anticon artists such as Why? and Doseone mixed together with the Das Racist. The tracks have an interesting mix to them taking elements of psychedelic afro beat, dub fusing them together with a very lofi grime infused production.

Young Fathers are less about fast spitting then they are about the slow but careful lyrical delivery! This really is great stuff!

here the stream for their 2nd tape!